So I really shouldn't have worried - my new book trailer for 'The Trinket Seller's Daughter' is up and totally fabulous. As some of you may know, my son took the trailer thing out of my hands. I was a little dubious and expected anything from exploding heads to armies of zombies - which is great but not for a medieval romance. Conor has done a brilliant job of editing the whole thing and there isn't a zombie in sight - fantastic! Check it out at -
www.nicolehurley-moore.com/mybooks.html

Nicole
Posted by Nicole Hurley-Moore at 10:26 am No comments:

So I decided that I would try my hand at making a book trailer for my book "The Trinket Seller's Daughter". I've seen other authors book trailers and I thought they were all pretty darn cool - so why not give it a shot. So I invested hours finding the right royalty free pictures and I even bought a couple. So finally, I was kind of pleased with myself and ready to start. Remember I said that I had spent hours on this - eventually I worked out how to use the 'movie' thingy on the computer and had managed to put the basic trailer together - pictures & script. This had taken a big chunk out of my Sunday afternoon but I was sort of chuffed with the results.
Enter my tech head teenage son. The same son that designs animation, shoots movies and wants to become a film maker. He chokes back a laugh and gives me a pitying stare.
"Mum, that's so newbie-ish. It's so - I've just learnt how to do this."
I responded with "But I have just learnt how to do this."
"Just give it here." He said with an exasperated sigh.

Last I heard he had disappeared into his 'cave' mumbling words like 'sound effects, fades and animation.'
My only hope is that he remembers 'The Trinket Seller's Daughter' is a historical romance and as far as I can remember there isn't any call for explosions or exploding heads (even if they are cool!)
Nicole
Posted by Nicole Hurley-Moore at 5:26 pm No comments:

My new novella 'Capturing Bliss' has just been accepted by Pink Petal Books!

I am absolutely thrilled that I will be able to share Blissot and William's story. It is another medieval tale that is set in England in 1139 AD.

To save her sister, Blissot de Woodville exchanges places and presents herself to Sir William Reynard as his intended bride. All would have been well if their marriage had remained one of convience. But Blissot finds herself drawn to her husband more and more. Bliss never meant to fall in love - but she did.  Unfortunately the lie that was born out of love, may be the very thing that destroys her fledgling marriage and William's trust.

Nicole
Posted by Nicole Hurley-Moore at 11:06 am No comments:

Just got an amazing review for The Trinket Seller's Daughter from Long and Short Reviews. A 5 book Rating - Wow, I'm thrilled and over the moon.
-Nicole 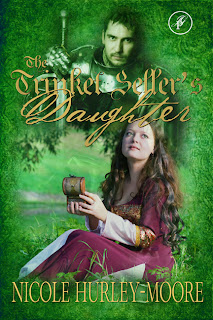