Today, I have the wonderful Danielle Lisle dropping in for a chat. Danielle's debut book The Roses Bloom, which is the first installment of The Rogues of Deception Series, has just been released by Total-E-Bound.
Danielle has been kind enough to offer a pdf copy of The Roses Bloom. So leave a comment and your contact details and we'll select one lucky reader.
Thanks Danielle for stopping by and telling us a little bit about yourself.

Where are you from & why do you love it?
While I find my life surprisingly boring, a lot of the time my location alone seems to gain interest from others. I live on a small acreage in the rural area of the Northern Territory, about 40mins outside Darwin. Think Crocodile Dundee and ‘Mick’s Place’ and you’ll be darn close to identifying my piece of the world. In fact, several scenes of the movie were filmed not too far away from here. Adding to that, Parks and Wildlife recently pulled a two meter Salty (croc) from our local creek *shudders*. No swimming in our local watering hole either – well, not unless you are planning to be something’s dinner anyway.
Snapping Handbags aside (don’t you just love the local dialect?) it’s a very picturesque place to live. Right now as I recline on my couch to type this, I can hear the crickets chirping and frogs calling to potential mates as the rain drizzles in a late seasonal shower. There is not a car horn or noisy neighbours within range, one thing I certainly don’t miss about city life.
What type of romance do you write?
Currently I am writing Historical Erotic’s. It’s odd how this came about, as I started writing stories aimed at the HM&B Desire line. A critique partner suggested I try writing an erotic and The Roses Bloom was the result. Not bad for a first attempt, even if I do say so myself.
What was the first thing you had published?
Hmm, *scratches head* this is a tough one. Prior to taking on the role as mother and more recently writer, I was previously employed in Human Resources. I could generally be found in the company newsletter promoting a new policy or procedure as it came into practice, no doubt a win with every line-walking employee in the organization. *snort*
When did you realize you wanted to be a writer?
About 3 months into motherhood. Changing nappies all day can do that to a person.

If you weren’t a writer what would you be?
Insane. *grins*
I would likely be heading back to work about now, but becoming a Published Author has allowed me the freedom to stay at home. I am very lucky.

Gerard Butler. *swoons* That man inspires my stories so much he should be getting a chunk of the pie. In fact, yes, he can. The only condition is he comes and requests it. *evil grin* Sorry Hollywood, you’re not getting him back! Bwahaha!

- Well, that's all well and good but you have to promise to share!
Superstitions.
I don’t think I have any….
How do you overcome writer’s block?
I think writers block comes part of the parcel with any form of writing. I have about 15 manuscripts on the go at any one time, mostly because I need to be in a specific mood when I write them. Some are comedies, so it stands to reason that I need to be in a quirky mood or at least feel jovial to write them. It’s a lot smarter to play a practical jokes on a fictional characters than someone in real life. I have no desire to be tied to a street lamp in my undies as payback for one of my pranks. Well, unless some handsome solider wanted to save me…?
Other manuscripts are serious and inspired by real life tragedies and are perhaps therapy for me in a way. I think because my mood changes like the weather (and my husband generally says, not for the better!) I move from story to story to curb any writers block. It can be somewhat frustrating though, as some manuscripts may sit dormant for a while until they curb my curiosity again, or I’m in that particular mood.

Excerpt From: The Rose's Bloom 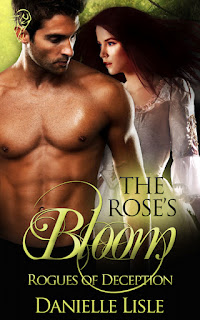 Northern Dorset Forest, England, 1803.
A clear blue sky was a rarity at this time of year. England had the worst weather, apart from Scotland, perhaps, where it rained no matter what the season.
Damon knew he shouldn't complain, especially on a day as grand as this. The birds were singing, the wind whispered softly as it passed him, and the wildlife rustled in the underbrush. He was not after a small creature. No, he had his sights on a mighty stag. His man of business had mentioned seeing one in the area when he had recently journeyed from London. How prized would the animal look hanging on his wall? Of course, his study was already filled with the heads of other beasts, but Damon would make sure his staff found room for this creature's massive antlers.
Approaching the large, winding river where he hoped his prey would stop to drink, Damon was surprised to notice a white mare tethered to a fallen tree. The mare raised her head as he approached, though she paid him and his black stallion little mind, finding the greenery below more appealing. He noticed the horse wore a sidesaddle and Damon's eyebrows drew down as he looked for another steed. The mare was a fine horse, her saddle also of noble quality, yet it was unlikely a lady of nobility would have ridden out alone. A lady would never be found unchaperoned. It could ruin her reputation.
Scanning the tree line along the wide river, he became more puzzled as time progressed. Had the lady come to some harm? Where was she?
A sudden ripple in the water caught his attention. A woman rose, gasping for breath, taking the air deep into her lungs before she laughed, flipping onto her back, floating around as she gazed up at the blue sky.
It took Damon a moment to overcome his shock at the woman's sudden appearance before he noticed she wore nothing but her slip. A very sheer slip. His eyes moved hungrily over the wet material, which clung to the vibrant curves underneath. The round softness of her breasts and the darker shadow at the apex of her sex intrigued him, as it would any hot-blooded male. His cock hardened as he sat upon his steed, conflicted between twin desires—to watch, or to make the girl aware of his presence? The former won out, and he encouraged his steed backwards, into the thickness of the forest along the river, concealing their presence. He was thankful for the soft splatter of water falling from the small waterfall upstream, masking his steed's hoof falls.
Unable to bear not viewing her for long, Damon dismounted and tethered his stallion to a branch before hurrying back towards the river, where he perched himself against a tree like a hunter stalking his prey. 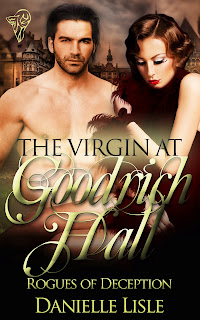 Danielle's second book in the Rogues of Deception Series, The Virgin at Goodrich Hall, will be released on the 1st October, 2012.
Links -:

http://www.total-e-bound.com/product.asp?strParents=&CAT_ID=&P_ID=1751
www.daniellelisle.com
Thanks so much Danielle, for dropping by and good luck with your Rogues of Deception series. I can't wait to read them!

Posted by Nicole Hurley-Moore at 2:04 pm