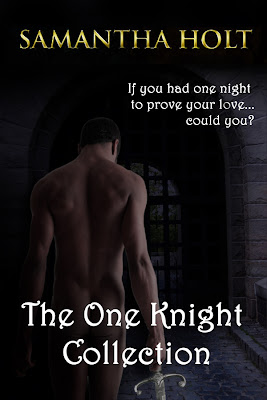 Hi everyone,
Today I have the lovely Samantha Holt dropping by. Samantha is a multi published historical author, who deals mainly with the delicious medieval period. Samantha lives in Warwickshire, England with her twin girls, and occasionally her husband who works abroad. She admits that the lack of constant husband encourages her romantic side. Samantha loves to combine her passion for romance and history into exciting and passionate tales.


How did you come up with the idea for your story?
My ideas generally stem from one thing. For example, my One Knight series came from the idea of couples getting together in the space of one night. I didn’t have a set idea as to how or why but I knew that, however these people had met, I wanted to explore the one night that changed everything for them.


How do you develop your plot and characters?
I’m not a planner but generally before I sit down to write I have a beginning, middle and an end. But that’s only worked out in my head. Character wise, I tend to choose an idea - something that means something to them, like trust or honour - and work around that. Other than that I tend to let the characters lead me.


Are you working on anything at the present?
It’s in the very early stages at the moment but I’m working on my next full length story. It explores the idea of a relationship developing while there are communication issues and involves two very sexy brothers!


What books or authors have most influenced your own writing?
I love classics but I wouldn’t dream of comparing my writing to them. My biggest influences were probably all the Harlequin authors I read growing up and the many, many indie romance authors that I’ve read over the years since. Every romance I’ve ever enjoyed has certainly shaped my understanding of the romance genre.


How do you come up with the titles to your books?
With difficulty! Sometimes they just come to me…but rarely. I tend to have a brain storming session and usually something comes up. Often it’s something really obvious and you wonder why you didn’t think of it in the first place!


What is your favourite book?
I have many that I adore and it does tend to change frequently but my one constant love is North and South by Elizabeth Gaskell.

If you could go anywhere in the world where would it be?

I’d like to go to Malaysia. I went there as a child and adored it. I understand it’s changed a lot since (this was not far off twenty years ago) but the people were wonderful and I love their culture.


What is a talent you wish you had, but don't?
I wish I could play an instrument. I’ve got a good sense of rhythm and I tried numerous instruments as a child but never stuck with them. I wish I had now.


Are you messy or tidy?
My house is generally very tidy but it never used to be in my nature. My room at college used to have a carpet of clothes but once I had children I found it difficult to cope with a messy house. Now I can’t function if there is any mess. My husband will say I’m a little obsessive about it now.


What is your favourite food?
I dread this question because I genuinely don’t know. It really depends what mood I’m in. I like a good curry, proper English chip-shop chips, minted lamb shank and scallops.


What inspires your writing?
It’s hard to say. Certainly not my daily life! I am a huge romantic and I like to get lost in a little bubble of romance so it’s really just escapism for me. Romantic books and films certainly encourage my romantic muse and certain settings will often inspire something, a waterfall or some beautiful scenery will spark my imagination.


Are you a sweet tooth?
I love chocolate éclairs! I enjoy savoury food equally but there’s nothing quite like a nice pastry as a treat.


What made you want to be a writer?
It was an accident really. I wrote a story for myself, as a bit of a hobby really, and enjoyed doing it so much that I realised I wanted to do it all the time.


Dreams and aspirations... what’s the one thing you want to do, see or experience above all else?
One thing! That’s hard to choose. I guess really I want to watch my daughters grow and become confident, hopefully happy, young women.

Samantha, thank you so much for stopping by for a chat!

The One Knight Collection
If you had one night to prove your love...could you?


One Knight
Katerina's arranged marriage promises to be one of indifference as she is convinced of her new husband's dislike of her. Will her wedding night prove her wrong?


Highland Knight
The Mackenzie and Sinclair clans have been warring for years so Anna is not impressed when she is told she'll have to marry the arrogant, if handsome, Niall Sinclair. She vows never to let go of her hatred of the Sinclair's but she quickly finds herself questioning her dislike of Niall. Can one night together erase centuries of hatred between two clans?


Black Knight
Lady Katherine yearns for excitement and danger, something far removed from her life as a lady. So when she discovers a dark intruder in her chambers will she take the opportunity to discover where her lust for danger could lead or will she reject her one chance for excitement and maybe more...?


White Knight
On the eve of her wedding, Lady Sara makes a bid for escape, having little intention of marrying a man she's never met. But Sara's plans go awry when she ends up in the hands of a mysterious knight.


As she finds herself consumed by the fiery passion that lies between her and this mysterious man, she has little idea that it is not just his name that he is hiding from her. Her knight holds a much bigger secret, but will it tear them apart or will she forgive his deception?


“I think we’ve got a lot to learn about each other. Will ye let me learn about ye, sweet lassie?” He drew her fingers to his lips, carefully brushing each one across his mouth.


Anna gasped at the contact and her eyes seemed bigger than ever.


“Niall,” he murmured against her fingers.


His name upon her lips was the undoing of him and he practically leapt forwards, dropping her hand and pressing an urgent kiss to her lips. She cried out slightly but she didn’t push him away. Instead, Anna’s hands came around his neck, clutching to him as he pushed her back.


Posted by Nicole Hurley-Moore at 8:58 pm