Hi everyone,
Today I’m featuring my friend – Samantha Holt. Over the past couple of months Samantha has released some delicious medieval romances. So, I thought we should bring them all together and check out their lusciousness en masse. 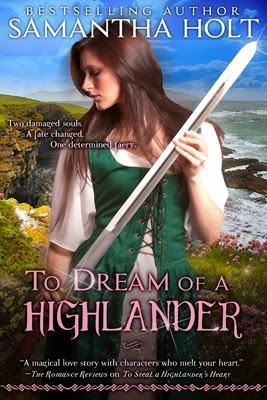 To Dream of a Highlander


But fate has other ideas.


In the midst of a Norse invasion, Catriona barely escapes with her life. Masquerading as her sister, she finds herself in the hands of Finn who intends to hand her over to her sister’s betrothed, Laird Gillean. In the interests of bringing peace to her home, Catriona is determined to continue the ruse—even if it means going along with the marriage and denying her growing attraction to a man who keeps his hurts hidden behind a quick grin.


If the green faery, Tèile, has anything to do with it, Catriona and Finn will come together—but only at the right time. Thanks to her last attempt at matchmaking, many paths were changed and now it’s up to her to put it right. Can she help Finn— who learned the hard way that sharing your life with someone only leads to heartache—get past his doubts? And will the battle-scarred Catriona even accept him into her heart? When Laird Gillean’s attentions toward Catriona become dangerous, both Finn and Tèile will find they have an uphill battle on their hands.
Excerpt:
He swung his gaze around, grateful the night had not yet swallowed them. A flash of green a few feet in front of him caught his eye. Hair swirling about her, gown waving like seaweed in the wash, she floated on the surface—knocked senseless.
“Damnation!”
With several strong strides, he caught up with her. The tide drew her away but it was not strong enough to defeat him. The sea now up to his hips, he dragged Katelyn into his arms. By God, her gown weighed her down. Even for a man of his strength, he felt as though he were carrying a heavy sack of grain rather than a sylph of a woman.
Wading to the boat, he hefted her out of the water and passed her to Logan. The man shook his head. “Sorry, Finn. We were concentrating on not getting tossed about in the wash. ‘Tisnae easy holding such a small vessel steady.”
“Aye, have no fear. ‘Twas my fault. The lass has clearly had a shock and I should have been watching her more closely.”
Logan laid her in the bow while Finn clambered in. He knelt by the lass and glanced up at Logan.
“She must have taken a hit to the head.”
“Aye, likely against the boat. Must have hit hard to render her senseless.”
Finn nodded. “Let us get on our way. We can do no good for her here.”
“Aye,” Logan agreed and backed away to help row the boat from the shoreline.
Leaning over her, Finn studied the gash on her forehead with a grimace. Poor lass. She’d have a mighty fine headache when she awoke. The steady rise and fall of her breasts against the soaked green wool assured him no permanent damage had been done.
“Ye’ll have to get her out of those wet garments,” Logan called out behind him.
Finn clenched his teeth. “Aye, thank ye, Logan. I’m aware o’ that.”
He ran his gaze over her. Damn his luck. He’d undressed many a fine woman but none had ever been out cold and an unwilling partner. No doubt the lady would be deeply ashamed he’d done as much. But he could hardly leave her to die from exposure. If anything, his sister would have his head.
Fingers tentatively prying at the front of her bodice, he forced his gaze onto the wood just behind her head. But the wet fabric proved too hard to tug apart so he pressed his hands to her back and lifted her lifeless form. Icy skin and sumptuous curves flattened briefly to his chest as he fumbled with the ties at the back of her gown. By God, when had he ever blundered like a whelp when undressing a woman? But he had to admit, though he’d had little time to admire her and the swelling on her face did not reveal her features properly, the flash of creamy skin was tempting enough. In other circumstances—and had she been anyone other than a lady in distress—he’d have enjoyed such a sight.
He had her face pressed into his neck as he pulled her gown from her. Soft skin under his fingertips forced his breath to stilt. Only the grunts of men rowing reminded him he was meant to be helping the lass and not enjoying the moment.
Katelyn’s chemise and gown came away in one go and he peered behind him, narrowing his eyes at the men. “Keep yer eyes away,” he warned, “or I’ll be having yer heads.” 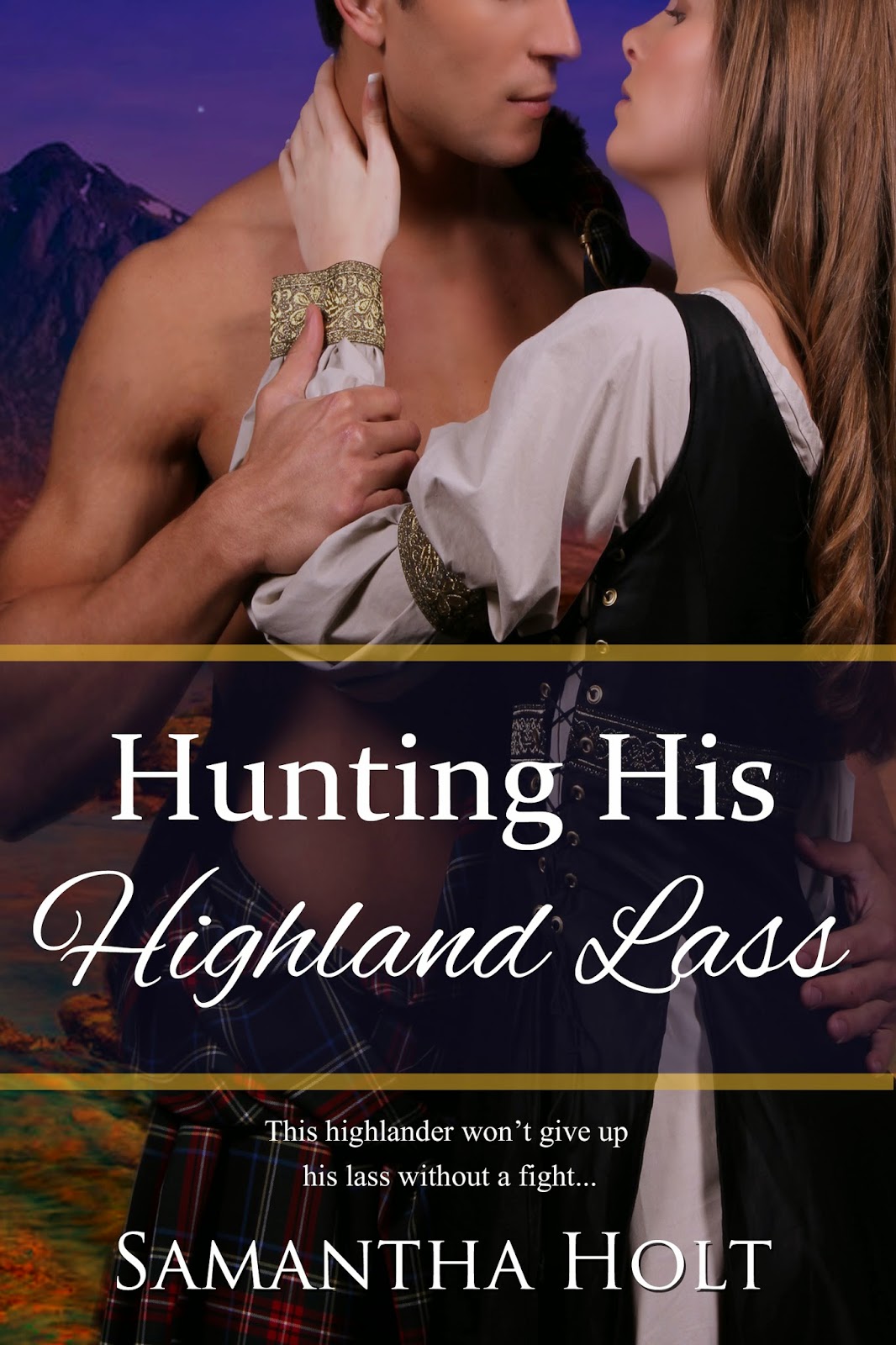 
Rory MacPherson has returned home to find his castle overrun by the English and his timid wife missing. So when he hears of her tales of bravery, he's just a little surprised. But his main concern is whether she is still alive or has been captured. Upon discovering her intention to run to her father's and to leave their affectionless marriage for good, Rory realises just how much sweet Isla means to him. Can the warrior get past his fears of being too rough for her?


Though fear of capture drove Isla out, it's the fear of returning to her marriage that keeps her travelling across the unforgiving Highlands. Not that she doesn't care for her husband, but she can no longer bear desiring a man who clearly doesn't want her. Believing that he must be sharing his bed with another lass, Isla plans to beg her father for refuge from the English...and her husband. But the journey is dangerous and Rory is a determined man. Will he even let her go?
Excerpt:
Inverness, 1297
Rory MacPherson grimaced as he eyed his dilapidated keep. The outer wall had taken a serious battering and the portcullis had been knocked in so that it hung at an odd angle. Of course, half of the destruction had been caused by his own men as they attempted to claim back the castle from the English. Thankfully the siege hadn’t lasted long but who knew what damage they had done? Not to mention his household was scattered to the winds.
His gut twisted. Isla’s brown eyes flitted through his mind, warmed by the fireplace as she sat in her usual chair. Had she got away in time? Or had she still been in there, defending his castle when the English broke through? He gripped his sword and swiped the sweat from his brow as he pushed past the twisted gate and raised his head to view the castle. The shutters were torn from their hinges, chunks of stone were missing from the walls. Blood soiled the bailey.
With a shake of his head, he hurried up the outer steps and into the Great Hall. He should never have left her to deal with this. A lass had no place fighting men’s wars. And seeing such bloodshed. Especially a lass like Isla. His wife was delicate, sweet. Not made for battle.
But still, they had kept the English at bay for several sennights. His men must have fought hard for fear of what the English might do to them and their lady. Rory swallowed the knot in his throat as he studied the hall with its upturned tables and the smell of death lingering in the air.
Ach, he should never have left Dunmuir. Should never have left Isla. He clenched his fist and considered what might have happened to her. His heart flipped as he realised he’d have to scour the keep for her. When they’d forced the English out, there had been no sign of his wife. He prayed she had fled. She was a beautiful woman—a tempting prize for any man.
He kicked aside a chair and began his hunt of the lower floor. Men entered the hall behind him and did the same, scouring the place for the enemy or any of their kin left standing. Who could have predicted the English would come up the coast? While he had joined the Scots on the border, the English snuck around them and took several castles, including his own. By the time he got word of the attack, it was too late. Only days before he arrived, the English succeeded in breaking through their defences and taking his home.
And mayhap his wife…
Buy links:
Amazon | ARe 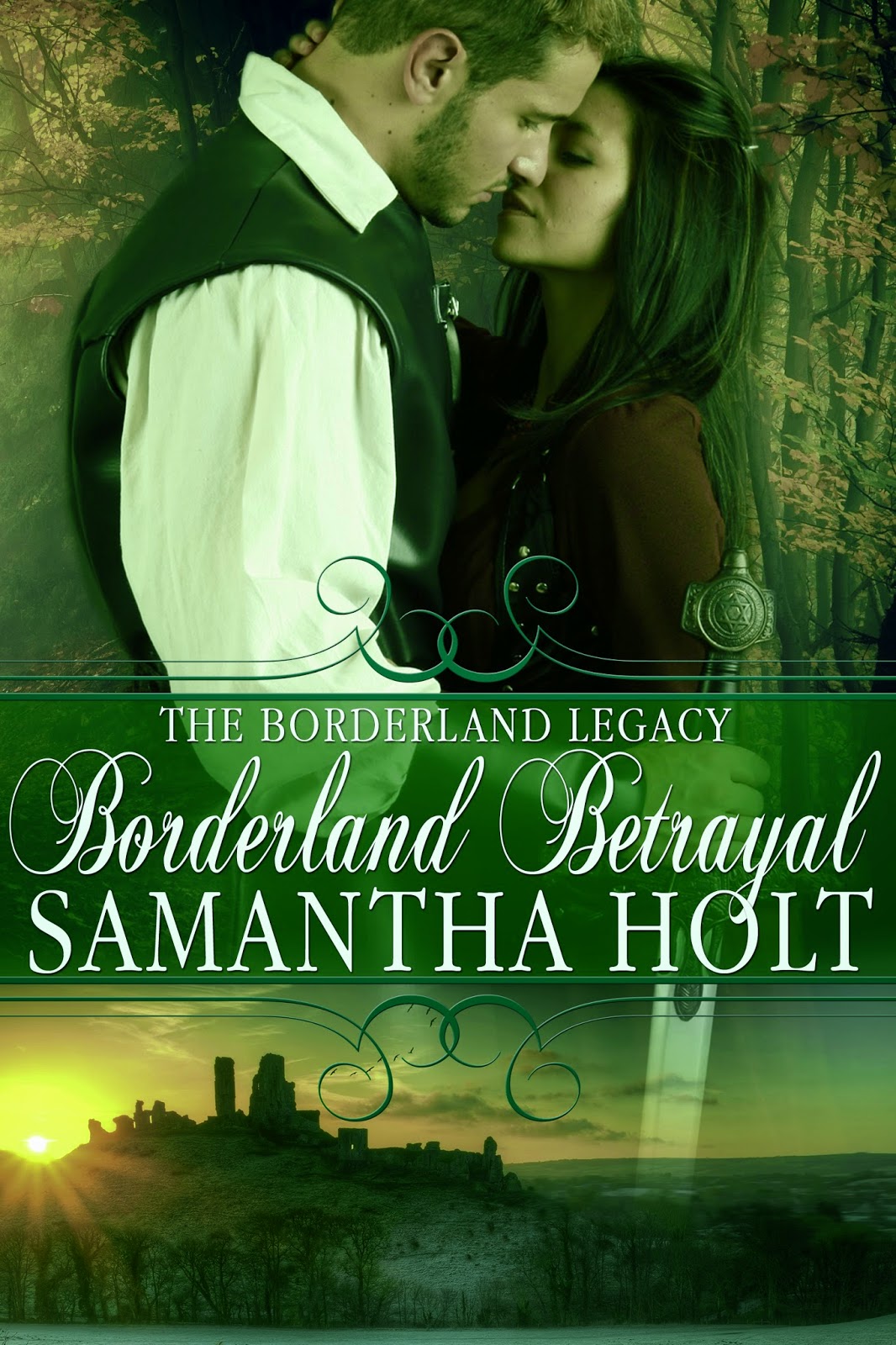 To Captain James, duty means everything. He’s worked hard to ensure the safety of the people of Thornewall and now the border reiver threat is gone and the recovery from the plague is well underway, he finds himself questioning his life.


Having lived on the edge of society for many years, Ellise is used to scraping for a living and she knows moments of happiness are few and far between. So she leaps at the chance to spend one sensual night with the handsome captain. Just one night and then she’ll be gone.


To her astonishment, fate throws her back into James’ sights when she accepts a job at Thornewall to look after the pregnant lady. Although the attraction still burns between them, she cannot give into it. One night has to be enough as she has far too many secrets. Should the honourable captain ever discover them, it would be more than her heart that would be at risk. Her life could well be at stake too…
Buy links:
Amazon | ARe
Here’s Samantha’s Blog
http://samanthaholtauthor.blogspot.com.au/
And you can find all of Samantha’s wonderful books on Amazon –
http://www.amazon.com/s/ref=nb_sb_ss_c_0_13?url=search-alias%3Ddigital-text&field-keywords=samantha%20holt&sprefix=Samantha+Holt%2Caps%2C879
Thanks so much for stopping by.
Nicóle  xx

Posted by Nicole Hurley-Moore at 10:37 pm