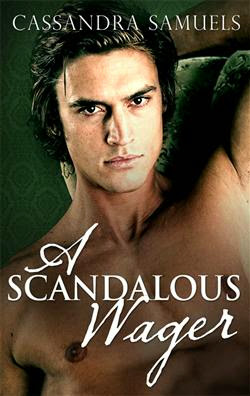 Today I’d like to welcome the lovely Cassandra Samuels, who has brought along her début novel, A Scandalous Wager.

Thanks so much for coming for a visit. J

Thank you for having me today on your Blog Nicole.

What type of romance do you write?
At present I write Regency Historical Romance, but I do have plans to also write in the Georgian period and Colonial Australia.

What inspired you to write this story?
A Scandalous Wager was inspired by folklore surrounding the raven. The heroine, Lisbeth, has been nicknamed The Black Raven (bringer of bad luck and death) because the ton of London believe she killed her husband (even though she was acquitted). There are many folklore tales that also say that Ravens are good luck, but for the purposes of the story the darker one fit better.

What comes first, the plot or characters?
Most often it is the characters. Usually, either the hero of the heroine come quite clearly to me and I build the story around them.

Are you working on anything at present?
The story I am currently working on is tentatively titled The Collector of Hearts and is a rake reformed story that I have had a lot of fun writing. Next I will be working on the sequel to A Scandalous Wager.

What has influenced your writing?
I would have to say Jane Austen as I had to read Pride and Prejudice in year ten at school and fell in love with it. I think watching the BBC miniseries (you know the one) cemented my love for the story and the period. I also read a lot of Johanna Lindsey books before moving on to Stephanie Laurens and Loretta Chase.

What made you want to be a writer?
I have always wanted to write my own book since was fifteen. I still have my first attempt which is partly handwritten, partly typed, tucked away in my filing cabinet. I remember researching how long it took to travel by ship from England to Australia. I was interested in history even then. When I was thirty I had a bit of a mid-life crisis where I asked myself where has Cassandra gone? I was a wife and an employee and a mother but I hadn’t really anything for myself. Writing was something I could do that didn’t cost much, I could do when I wanted to, and I could use my creative mind productively. My mother encouraged me to do it and I started working on my first full length novel that week. It wasn’t until I joined Romance Writers of Australia (RWA) and the Breathless in the Bush group that I realised how much I didn’t know about the craft of writing a novel. I had no idea about goal, motivation and conflict, character arc or the three act structure. I’ve been learning ever since.

What advice would you give an aspiring author?
If you are serious about writing, do it. Find your voice and trust it. Join RWA.

As the Black Raven, she’s cold, distant, and alone, untouched by the gossip and scorn of her aristocratic peers. Until he enters her house – and her life – and suddenly her icy shell is no match for the heat of attraction…

Notorious Widow Lisbeth Carslake, Countess of Blackhurst was acquitted of her husband's murder, but no one believes in her innocence. Known as the Black Raven, bringer of bad luck and death, she is eviscerated by the gossips and mocked in the clubs. She’s also the subject of London’s most scandalous wager.

Oliver Whitely, Earl of Bellamy, needs money, but it takes more than a few drinks to take on The Black Raven Wager. He finds himself drunk, at her house, and – more surprisingly – inside, and agreeing to a business proposal at the end of a fire poker. She will let him win the wager, and he will help find her husband’s killer before the killer finds her. But business agreements don’t mean trust, and Lisbeth certainly doesn’t trust Oliver, her body’s reaction to him, or her heart.

Love may be the biggest gamble of their lives, but is it a wager their hearts can afford to lose?

Set up. The hero, Lord Bellamy, has drunkenly taken on The Black Raven Wager and to his surprise she has let him in, but she has other plans for him that he is about to find out.

She spun to face him, fire poker drawn level with his heart. ‘Do sit down, Bellamy.’
This time he did laugh. He was in no doubt he could overpower her before she did much harm with that mere stick in her hand — as pointy and well-crafted as it seemed.
‘I believe you owe me an answer, Lord Bellamy.’ She moved towards him brandishing the poker like a rapier. He couldn’t believe his bloodshot eyes. He laughed louder. He nearly told her to keep the tip up, until he saw where her target was and it was no longer his heart. He stopped laughing.
‘Fifty pounds,’ he confessed with a slow smile, for there was no longer any reason to conceal his true mission here. Confounded woman had him at a disadvantage though. If only Henry had not been such a blasted fool, leaving him with more debt than he knew how to handle, a doddery old aunt and two entailed estates full of dependents. Oh, and no money.
He saw her glance at the mantel and realised his time was up. Should he start praying now or…? He wanted to laugh again. If only the Frenchies could see him now. Undone by a handsome widow and a fire poker.
Her gaze left the clock and seemed to focus on his cravat. ‘I fail to see what is so amusing to you, Lord Bellamy. I can only assume you know of my reputation. Why else would you be here? Ah, yes, the money. Fifty pounds, was it? How would you like to earn a  lot more?’

This was a twist he had not expected. ‘Excuse me?’
She glided over to him and pointed the poker at his vitals. ‘Let me explain it for you. These little wagers have been happening for quite some time, Lord Bellamy. You see, you are not the first man to sit on my steps and demand entrance. Some have even tried to break in. I find this whole business very childish and most annoying. Can you understand my frustration, Lord Bellamy?’ The poker came very close to his pride.
‘Yes, most annoying,’ he replied, his eyes riveted on the poker. She had no idea how easily he could turn this scenario on its, or in this case, her derrière. He was too intrigued, however, by her suggestion to bother demonstrating just now.
‘However, if you will assist me, I think you will be more than happy with the arrangement I am proposing.’ She stared at him coolly.
‘Arrangement?’ The fire poker remained hovering above his most important asset.
‘Yes. I find I require an escort. You see, I presume there are a number of…outstanding wagers concerning my reputation as the Black Raven, and I will allow you to collect them on the condition you but play the gentlemanly escort.’ She took the poker away from his crotch. ‘Are we in agreement?’

Thanks for stopping by.
Nicóle xx
Posted by Nicole Hurley-Moore at 9:00 pm