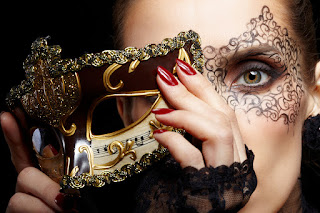 
As you can probably tell from the title I’m researching again. I’m looking at all the romance, colour and intrigue of a masquerade ball and trying to weave a story from it. As a little girl I always wanted to attend one and unfortunately I never got to.  This is what happens when you read far too many fairy tales which were illustrated by Arthur Rackham (dreams of ball gowns, masks and silks which were never realised!). Anyway, I came across a few interesting facts and snippets about masked balls. Hope you find it interesting.

The festival is believed to have developed around the Roman Catholic Lent. The carnival was associated with pre-Lenten festival practiced on or around Martedí Grasso (Shrove Tuesday). The forty days of Lent mark a period of self reflection, prayer, repentance, alms giving and self denial. This is accompanied with fasting and the abstinence of meat, dairy product, fruit and eggs. Lent is to remind the faithful of the forty days according to the gospels (Mathew, Mark & Luke), in which Jesus fasted and was tempted by the Devil in the desert.


The history of the Venetian carnival is thought to have originated from the annual celebration of the Doge Vitale Michieli II’s victory over Ulrich of Trevan, Patriarch of Aquileia in 1162. Ulrich was captured along with twelve of his vassals. They were released on the condition Ulrich would pay an annual tithe or tribute to Venice in the form of one bull, twelve loaves of bread and twelve pigs. The pigs and bull were slaughtered each year in the Piazza San Marco around Shrove Tuesday to commemorate the victory.


By the 15th century, masquerade balls were a feature of the carnival season. They were used to celebrate pageants, triumphal processions (for marriages and dynastic events) and Royal Entries. Royal Entries were also known as ‘Joyous Entries’ which signalled the triumphant festivities accompanying the formal entry into the city of its ruler.


By the 16th century in Italy, masquerade balls extended to public costumed festivities. Particularly popular in Venice, these elaborate dances were associated with the Venetian Carnevale and attended by the aristocracy. With the fall of the Venetian Republic at the end of the 18th century, the use and tradition of masks gradually began to decline, until they disappeared altogether.


However the popularity of the masquerade ball grew and extended throughout Europe during the 17th & 18th centuries.

Posted by Nicole Hurley-Moore at 4:45 pm