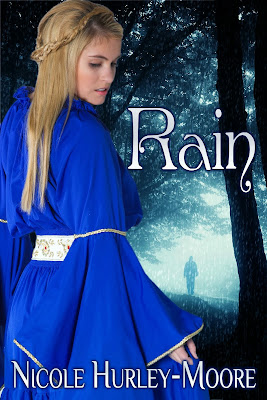 
Rain is released today!!!  Woohoo!!! I’m so excited I might end every sentence with an exclamation mark!


In case you missed it (if that is even possible as I’ve been blabbing about it constantly) Rain is my medieval paranormal romance. It is set in the year 1216 AD in the fictitious village of Farran.
It’s the story of Nuri, an artist who lives outside the village and Maras, an elemental being who is the embodiment of storms. Nuri is drawn to Maras but her growing attachment is threatened by Brother Erebus, who believes Maras is a demon.
Nuri must choose whether to follow her heart or be tied to the edict of the Church and village. Maras is transient and is bound to the elements and their love may be as fleeting as the storm itself. But Nuri may sacrifice more than her heart when the Church brands her angel a demon. As Brother Erebus will do anything to protect her soul from the silver haired devil, even if he has to crush her body to do it.


I loved blending a little medieval history with the paranormal. My aim was to create a moody story which was reminiscent of an old fairytale.


I hope you enjoy Rain!


At the moment Rain is available from...


Amazon. Au  (Yes, we finally have an Amazon too) 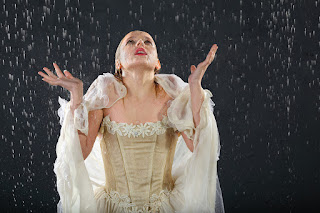 I thought I would leave you with a snippet...
She watched in fascination his pale eyes warming as he filled her completely. As they moved together, the exquisite sensation of their bodies becoming one made her quiver. He took one breast into his hot mouth; as he sucked and twirled his tongue around her budding nipple, she felt her heart begin to race. Her head fell backwards, but she stared at the sky without seeing it as all her senses were centred on Maras, her angel who had the ability to fly her soul to heaven.
The first cold drip hit her cheek and ran down her face, the second her jaw, and a third struck her shoulder. Her head snapped back, and she stared at Maras. His eyes were now closed, and he was lost in their lovemaking. As she reached out her hand and caressed his cheek, three more stinging raindrops struck her arm. Nuri felt the tears gather in her eyes. Too soon, it was too soon to say farewell. Another dozen drops fell from the gray sky.
She opened her mouth but her voice faltered. An ache began to burn in her chest and her eyes brimmed with tears. “Maras, the rain has come,” she whispered.
He stilled, opened his eyes, and stared at Nuri. He reached out and his fingers caught her first falling tear before it had a chance to track down her face. The rain became heavier as it made its way down the mountain. She could hear it drumming against the still water of the pool, against the rocks and the pebbles. The rain was cold, but for Nuri, each drop seemed to scorch her skin.
“’Tis nothing but a summer shower. It will disappear long before it reaches the river and the far mountain.” He caught her chin with one hand, and gently turned her head. “See, the clouds already dissipate, and soon the wind will blow the rain away. I cannot leave you yet, my light.”
“But I thought...”
“I know.” He brushed the last tears from her eyes before he pulled her back into his arms and crushed her mouth with his own.

Posted by Nicole Hurley-Moore at 10:04 am