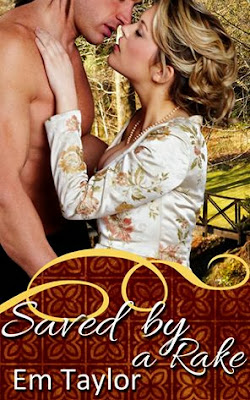 
Today I would like to welcome all the way from Scotland, the fabulous Em Taylor.
Em has just released her debut Regency novel, Saved by a Rake.


Welcome Em, thanks so much for visiting and answering a few questions about you and ‘Saved by a Rake’.


How did you come up with the idea for your current story?


I wanted a shocking start to my book and chose to start with every Regency lady’s worst fear—her ruination.
How do you develop your plot and characters?


It tends to happen organically since I am a complete pantser.


Book two which is the story of Rebecca’s brother—a subplot that was not developed in Saved by a Rake.


What has influenced your writing?


Reading other books in the genre. While not a great aficionado of the classics, I love books set around the time that stay relatively true to the language and world-view of the time.


Usually they just come to me as I’m writing. Or I do a bit of brainstorming with a friend over Facebook chat.

If you could go anywhere in the world where would it be?

I really want to visit Dollywood in Tennessee… is that lame?


What inspires your writing?


What made you want to be a writer?


I have a vivid imagination and I think up stories in my head all the time. So why not put that to good use and give other people pleasure from it.


Any dreams and aspirations?


I want to be able to write full time.


When Lady Rebecca Eversley is left ravished by the Earl of Newthorpe and facing ruination, she has the choice to point her pretty little nose in the air and face the gossips of the Ton or scurry off to the country to live out her life as an old maid. When she meets Lord Daniel Ramsey, a notorious rake, she decides on the former course of action.


Daniel has been given an ultimatum, marry before his father dies or lose the majority of his inheritance money. Rebecca seems the perfect candidate, especially once rumours about her start to circulate in the drawing rooms of Mayfair.


When Newthorpe is found dead on the morning of their wedding, the people they care about find themselves suspects in the case. Who murdered Newthorpe and can Rebecca ever get over what he did to her?


As his lips briefly touched hers, the carriage jolted, pushing him closer to her. He caught her around the waist to ensure she did not bounce off the seat, then, without thinking, covered her mouth with his.


He noted a moment’s hesitation from her before she moved her lips and reached up to tangle her gloved fingers in his curls. Tentatively she touched her tongue against his, causing him to stifle a groan. He had been without a woman for over a month and now his pretty little wife had her arms around him, kissing him as if she had done it a thousand times. She was a quick learner as she explored his mouth with her tongue, pressing herself closer to him.


Devil take it. He had been struggling all day to stop himself becoming aroused. Her wedding gown had been low cut and her stays showed her breasts off perfectly. He had been distracted throughout the service and the wedding breakfast as images of disrobing her later had flitted through his mind. He wanted to see those breasts again.


He unfastened the three buttons on her pelisse, peeling the material away to her side, then pulled out of the kiss and began to pepper light kisses along her jawline. God, he wanted her, and he was most definitely aroused now.


He kissed her neck and was about to place his hand over that beautiful inviting orb, when he sensed her tensing. He pulled away slowly, tugging the material of her pelisse back over her. When he looked into her eyes, they were bright with confusion, passion and fear, all clearly warring within her. He cursed himself for being too impatient. Then he cursed Newthorpe for what he had done and could not help thinking that death was too good for the blaggard.


“No. That’s the only word you ever have to say and I will stop,” he said simply.


“I am sorry, my lord. I just expected some time before… well I expected to wait until we were in the coaching inn tonight.”


“Yes, of course. It was very impatient of me. I beg your forgiveness.”


Rebecca nodded and looked out the window.


The streets of London rushed by as they headed for the Great North Road. He studied the view out of the other window, and they sat in silence for a long time. Eventually Rebecca spoke in a small voice which sounded as if she was on the verge of tears.


“I fear I will not make you a very good wife if a mere kiss frightens me.”


He turned and took her hand in his. He wanted her to be comfortable and not think he was going to pounce on her and ravish her at any given opportunity.


“I have no doubt that you will make a wonderful wife, Rebecca. You just need time and patience and I have an abundance of both.”


She turned large, tear-filled eyes towards him. “You should take a mistress as soon as we reach Scotland.”


He could not possibly have heard correctly. She was giving him permission to have a mistress? Surely not. But her mouth was set in a firm line as if she had made up her mind. A stab of hurt hit him. She thought of him as a rake who would be unfaithful.


He pursed his lips and considered her. What should he do? He wanted to rail at her and tell her he had no intention of being unfaithful. He had taken vows only a few hours previously and yet now she was giving him permission to break them. But maybe the idea of him having a mistress brought her comfort. She was clearly terrified of intimacy between a husband and wife.


“We shall discuss it once we reach Scotland, my lady. I have no wish to think beyond our present journey.”


“Do you not see that I can only ever tolerate the marriage bed for the sake of giving you an heir,” she wailed, pulling her hand away from his. “He ruined me in more ways than you can ever know.”


“You are only ruined if you allow him that power. A skilful lover could make you feel very different about certain aspects of a marriage.”


“Well, I have heard enough tales to know that you are a skilful lover, Lord Ramsey. But I think you should save it for your mistresses.” Her tone was almost venomous but he ignored it, knowing that it was fear that drove her.


She turned her head to look out of the window again. He was at a complete loss. She thought him almost as bad as Newthorpe. Well, not quite but she did not think he would be faithful. A long silence stretched out between them as he considered what to say to her. Her back was rigid, and she swiped at her cheek with one gloved hand.


“What he did has destroyed me, and I am not sorry that he is dead. I wish I had been the one to kill him.”


She burst into tears and fished in her reticule for a handkerchief, he presumed.  He held his out to her and with a large sob she accepted it. He untied her bonnet and threw it onto the seat opposite before gathering her in his arms.


She tried to move out of his grip but this time he held firm, knowing that she would accept his comfort, which she did, weeping as she buried her face in his coat.


As her sobs turned into sniffles, which turned into silence then light snuffles of sleep, he held her and wondered how he was going to help his beautiful young wife over her fear of physical love.

Thanks so much for sharing a little bit about you and Saved by a Rake.


Em was born and brought up in the Central Belt of Scotland and still lives there. She was told as a child she had an over active imagination—as if that is a bad thing. She’s traded her dreams of owning her own island, just like George in the Famous Five to hoping to meet her own Mr Darcy one day. But her imagination remains the same.

Unfortunately, Em was put off reading and writing by school and although she rediscovered her love of reading many years ago, she only tried her hand at writing again in 2011. After a year of writing fan fiction, she wrote an original short story for an anthology. This was followed up with two more shorts and 4 novella length books, all published under a pen name. Having fallen in love with a new sub-genre, courtesy of books by Mary Balogh and Lynsay Sands, she decided to try her hand at her new favourite genre for reading—Regency.

Having bitten the bullet, she feels she has found her home in the 19th century, and it does give her an excuse to watch Colin Firth in a pair of buff breeches and riding books ad infinitum.

Posted by Nicole Hurley-Moore at 6:41 pm