Today we have a sneaky peek at Allison Merritt's upcoming book, Eban. Allison will  also be running a giveaway, so check out the bottom of this post for details. 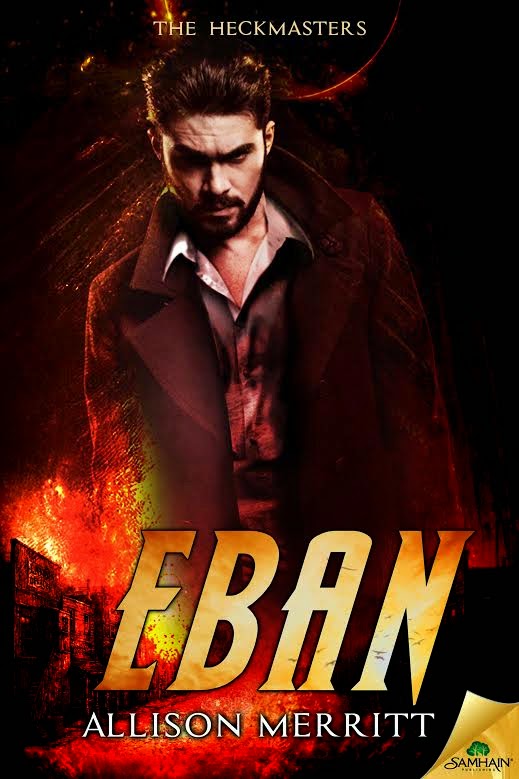 If love can’t save them, there will be hell to pay.


Grateful for his mother’s human blood that cools the dark fire of his demon father, Eban Heckmaster has set up a medical practice in New Mexico territory. But there’s no hope of living a normal life until he rids himself of a seductive demon that’s been pursuing him.

Vanquishing it won’t be as simple as sharpening his demon-hunting sword. The clever creature is hiding inside his best friend’s head, and she has no idea of the havoc she’s been wreaking, especially with his body.

Beryl suspects Eban knows why she’s been waking up with no memory of where she’s been or what she’s done, but he’s not talking. But when she inevitably learns what he’s hiding—or rather, what’s hiding inside her—she wonders if her love for him is real, or an illusion created by the demon’s lust.

Eban is losing the battle to hold his rising desire in check. There may be only one way to extricate Beryl from the beast entangling her mind. Call upon his demon blood...and offer it as a sacrifice.

Warning: Contains a half-human, half-demon doctor who can heal anyone except himself, and a woman who’d blush if she could remember the sensuous torture she’s been inflicting on him. Could make you wonder if you should start listening to the voices in your head...

A love of reading inspired Allison Merritt to pursue her dream of becoming an author who writes historical, paranormal and fantasy romances, often combining the sub-genres. She lives in a small town in the Ozark Mountains with her husband and dogs. When she's not writing or reading, she hikes in national parks and conservation areas.
Allison graduated from College of the Ozarks in Point Lookout, Missouri with a B.A. in mass communications that's gathering dust after it was determined that she's better at writing fluff than hard news.
Social media links:
Blog – http://havenovelwilledit.blogspot.com
Facebook – http://facebook.com/allisonmwrites
Twitter – http://twitter.com/allison_merrit
G+ - http://gplus.to/allisonmerritt
Goodreads – http://goodreads.com/AllisonMWrites
Pinterest - http://www.pinterest.com/allisonmwrites/
Read the first book in the series: Wystan (The Heckmasters)
Buy links:
Samhain - http://store.samhainpublishing.com/wystan-p-73651.html
Amazon - http://amzn.com/B00L501TJK
B&N - http://www.barnesandnoble.com/w/wystan-allison-merritt/1119847207?ean=9781619222892
Thanks for stopping by.

Nicóle xx
a Rafflecopter giveaway
Posted by Nicole Hurley-Moore at 9:28 am